South Carolina Governor Henry McMaster declared a state of emergency in South Carolina for Hurricane Irma on Wednesday after the official forecasts for the storm shifted east, raising the chances hurricane Irma would strike the state.

He stressed "It is a precaution. This is not an order of evacuation," McMaster said at the state's Emergency Management Division. He did urge residents to get ready now for the possibility of a manadatory evacuation..

"Assume it's arriving tomorrow morning and get ready. When that hurricane is coming, when it gets close, it's too late," he said. "If we say go, that means it's time to go."

The declaration permits the state to begin putting hurricane preparations into effect and allows McMaster to use the National Guard if necessary.

McMaster made the declaration around noon Wednesday after the National Hurricane Center's forecast on Irma's track put the prospect of a major hurricane just off the coast of Florida -- about 200 miles away from Charleston -- next Monday morning.

"We got this," McMaster said Wednesday at an already scheduled summit on the state's opioid problem. "We can't stop the hurricane. If it comes, it's going to be here, but we can be ready for it."

Irma had winds Wednesday of 185 mph, making it the strongest Atlantic Ocean hurricane ever measured.

Meanwhile in North Carolina Gov. Roy Cooper on Wednesday also declared a state of emergency, which will go into effect at 8 a.m. Thursday. Cooper said the state is considering possible impacts to all 100 counties across the state.

“It is not too soon to get ready,” Cooper said. “Irma is a powerful storm.”

North Carolina is still several days away from feeling the effects of Irma, but could begin to feel wind from the storm Sunday and could see rough surf and beach erosion as early as Friday.

Cooper urged residents across the state to think about possible routes and destinations for evacuation if it becomes necessary. He stressed that emergency supplies such as water, non-perishable food, phones, chargers, flashlights, batteries, blankets and sleeping bags should be checked and restocked. Updated information can be found at readync.org throughout the storm. 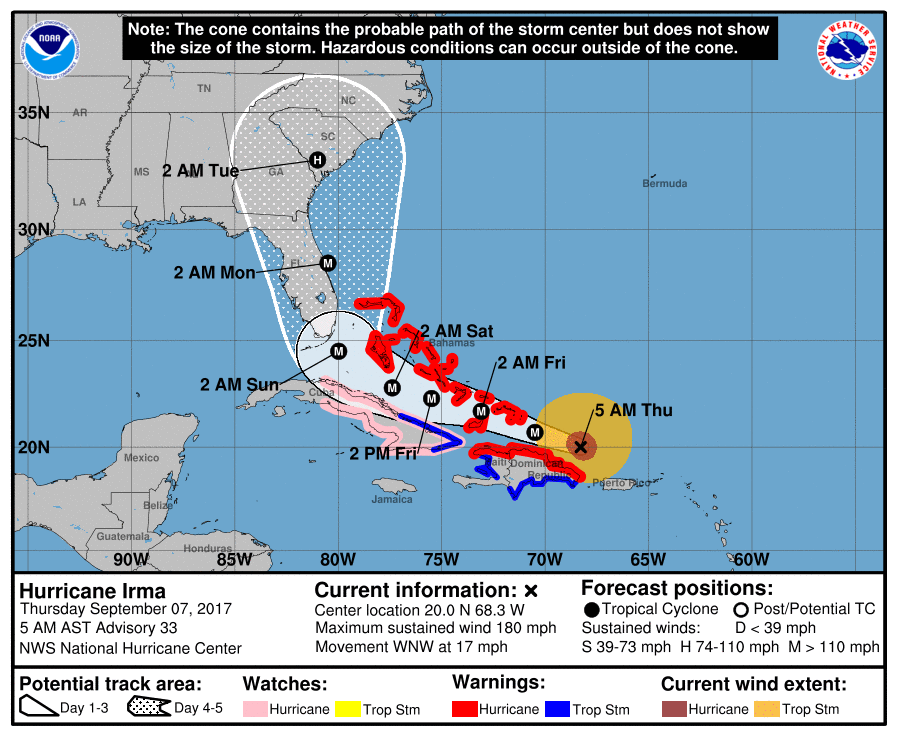